A garden is thought to have been cultivated at Wallasey-Beaumaris from the early 1860s when American brothers took up a parcel of land near Three Mile Creek and sought their fortunes on the Ovens goldfield. Shrubs of old, simple-petal sweetbriar roses still flower on the edge of a cart track near the garden in which stands what was once a miner’s cottage – now much extended.

The garden of about one hectare grows across the foot of a hill that rises 560 metres above sea level. The hill has a southerly aspect and features spectacular but senescent examples of Narrow-leaf Peppermint (Eucalyptus radiata) and Grey Box (E. microcarpa). There are also stands of naturally-occurring Blakely’s Red Gum (E. blakelyi) and a diversity of planted oaks, including Red Oak (Quercus rubra), Sawtooth Oak (Q. acutissima) and Pin Oak (Q. palustris), as well as Acer species, Tulip Tree (Liriodendron tulipifera) and Spanish Chestnut (Castanea sativa).

The garden was variously cultivated and neglected for long stretches before it was refurbished and extended from the late 1970s. It had long been known as ‘Beaumaris’ – a Norman French name for the ‘marsh’ vista that remains below the garden drive. Helen Gordon and Neil Smooker began renewing the derelict garden from 1977, challenged by persistent “bullrushes, blackberries, dock and other tenacious weeds …that thrived on poorly-drained clay soil”.

An old French perry pear, a towering specimen of Photinia beauverdiana var. notabilis – brought into cultivation from China by plant hunter Ernest Wilson – and venerable loquat Eriobotrya japonica and mulberry Morus nigra are thought to be among the garden’s original assets. These, and the later planting of Mahonia bealei and a pair of Cyrilla racemiflora – the swamp titi or he-huckleberry, the sole species of a genus endemic in Louisiana and the Carolinas – are among the garden’s unusual trees and shrubs.

Berberis thunbergii ‘Fireglow’ and B. thunbergii var. atropurpurea – forms of Japanese barberry – have become spectacular harbingers of winter. The garden also includes numerous camellia species and varieties – which do well in the Indigo hills – an alley of Pyrus ussuriensis, weeping cherry, Acer, Amelanchier, Berberis, Betula, Arbutus, clematis, Mahonia, roses, and a grand example of Prunus laurocerasus – the cherry laurel which so often follows the discovery of gold.

A new orchard of about 40 heritage and new varieties of apple, quince, pear, peach, cherry and citrus was planted on the hill above the garden from 2014.

You may also be interested to visit Varrich open garden in Stanley (nearby Beechworth) this weekend.

Garden notes are written by the garden owners to describe their garden.
Download and print to bring when you visit the garden. 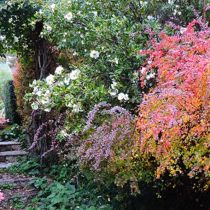 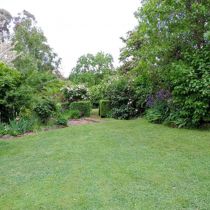 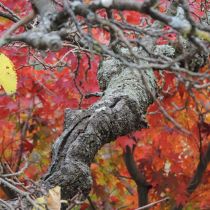 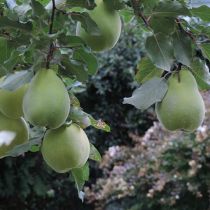 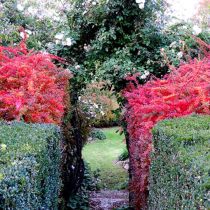 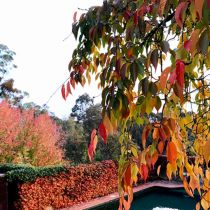 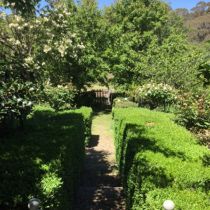 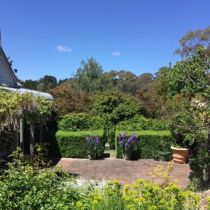