Plant of the Season - Autumn

Gayle Parkes presents the 'Plant of the season'. She also posts to OGV's Instagram - make sure you check back regularly for her latest post.

Ginkgo biloba, commonly known as ginkgo or gingko, also known as the maidenhair tree, is a species of tree native to China. It is the last living species in the order Ginkgoales, which first appeared over 290 million years ago…. Wikipedia.

Oh how I wish I could grow a ginkgo! Since my love of gardening blossomed, many years ago when my young children became more independent and I had time to visit gardens, I have coveted the ginkgo tree. It has never been an option for me to even attempt to grow such a magnificent specimen as, despite the fact that I had plenty of space, I gardened in a hot, dry climate with dreadful clay soil. Fortunately I was able to appreciate from afar the beauty of this glorious tree with frequent trips to autumn garden openings in the Dandenong and Macedon Ranges where I could sit quietly and wonder at the spectacle of a ginkgo in all of its butterey, golden autumnal splendor. I still embark on my annual ritual of an autumn visit to witness the turning of a ginkgo “somewhere” in Victoria. There are many to be found in the cooler areas of our state.

Some interesting facts! Apparently, Ginkgo biloba is the oldest living tree species, it has remained on earth about 200 million years, which is why it is also called a “living fossil”. As we know, ginkgo has been much used in traditional Chinese medicine. It is said to help a range of ailments including high blood pressure, poor circulation, memory loss and even Alzheimer’s disease. A ginkgo tree can live for more than 1,000 years.

It is a very slow growing, deciduous tree with a large and elegant habit.

Ginkgo has been planted since ancient times in Chinese and Japanese temple gardens and is now valued in many parts of the world as a fungus- and insect-resistant ornamental tree.

The common name, "maidenhair" was inspired by the unique, double-lobed, very pretty fan-shaped leaves with veins spreading from the stalk of the leaf, reminding people of the maidenhair fern (Adiantum spp.). The leaves start out green but change to golden-yellow in autumn. Before the whole leaf turns golden, there is sometimes a stage during which the leaf is two-toned, with separate bands of gold and green. I think this is my favourite time, just before the tree totally turns. The golden leaves remain on the tree until late in the season, and then fall rapidly. The bark is grayish, deeply furrowed on older trees, and has a corky texture.

Many types of ginkgo start out narrow in shape while young but then become quite wide as they age, growing into shade trees up to 30 metres tall and 2.5 metres in diameter. There are several cultivars available in Australia including Autumn Gold, Pendula, Variegata, Saratoga, Fastigiata. Best to do your homework to choose just the right shape to suit the particular spot that you have in mind for your garden.

In my opinion this very handsome tree looks at its best grown as a single specimen with plenty of room to shine. Plant your gingko in full sun and protect it from strong winds. They prefer deep, fertile soils rich in organic matter, but will survive in poorer soils. Young trees need deep, regular watering until established.

At the other end of the spectrum, the ginkgo is also often used for Japanese style bonsai. If you are into that sort of aspect of gardening, they can look elegant and majestic when trained well.

Although becoming more popular all the time, ginkgos may be hard to find at some nurseries but any good garden centre will be happy to “get one in for you”. There will be one for just that special spot in your garden, perhaps as a street tree in your neighbourhood, or if you garden on a postage stamp like me these days, there is bound to be a gingko in one of Open Gardens Victoria autumn garden openings over the next month or so. 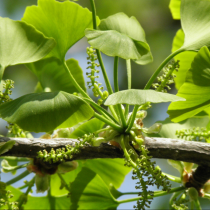 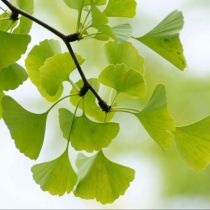 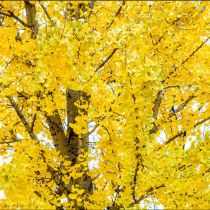 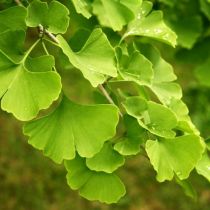 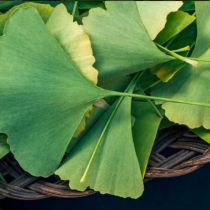 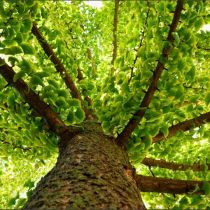